When you need a cap that can keep the rain and animals out, as well as stop down drafts, the Monsoon cap is what you need. We install these caps. Call today to schedule or talk to us about your chimney . (503) 653-3819. 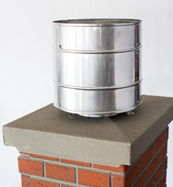 A 24-year veteran of the chimney repair trade, Cliff has experience in most phases of chimney construction and repair. He began as a chimney sweep apprentice in 1991. Two years later he began to educate himself in bricklaying and chimney construction. He claims that "it has been an interesting trade to say the least.

Call us today for your service.